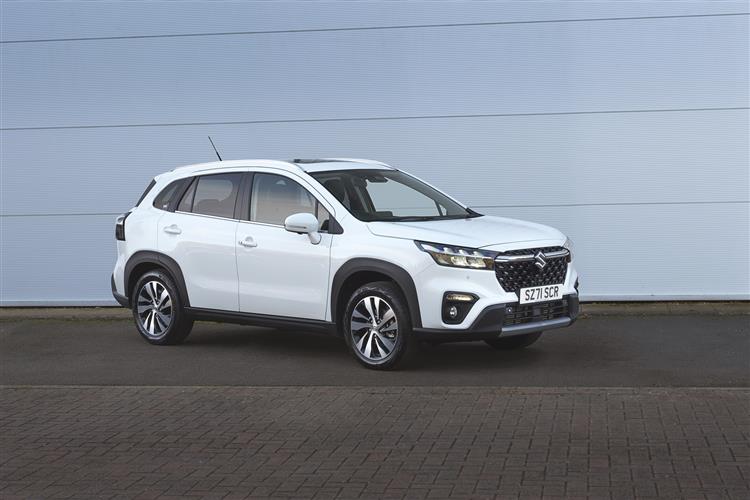 Suzuki must find it frustrating to see other brands doing so well in the thriving Crossover market. The Japanese maker has, after all, been offering products of this sort for some time, most notably the first generation SX4 model, originally launched way back in 2006, easily pre-dating the original Nissan Qashqai that most people think pioneered this class of car. That very first SX4 was a little too small, a little too shy and retiring and a little too poorly promoted to set the sales charts alight the way its Nissan competitor did, but Suzuki watched, learnt and came back fighting. As a result, in 2014 we got the SX4 S-Cross, a much more competitive proposition and a model that's gradually evolved. In 2020 it gained mild hybrid assistance for its 1.4-litre Boosterjet petrol engine and in late 2021, the looks were facelifted too, creating the car we're going to look at here, a compact SUV but a particularly spacious and really quite efficient one.

This S-Cross now offers two petrol engines. The more affordable, the 1.4 Boosterjet Hybrid (which is actually a mild hybrid and offers 129hp) comes with manual transmission. If you want an auto (actually a 6-speed automated manual), you'll need the 1.5-litre Full-Hybrid 114hp unit. Both engines can also be had with ALLGRIP AWD. Let's start with the cheaper 1.4-litre version. You may be familiar with the way that mild hybrid engines work but just in case not, here's a quick re-cap. Basically, energy that would otherwise be lost when braking or cruising off-throttle is harvested via a kinetic energy recovery system and sent to a small lithium-ion battery that here has been placed beneath the front passenger seat. This is used to drive a belt-driven 'ISG' unit (an 'Integrated Starter/Generator') and power the engine's stop/start system. Suzuki's current 48-volt set-up can also deliver a couple of other important benefits. The first is something quite unusual amongst current mild hybrids - the ability for this car to idle and even coast on full-electric power, though only below 10mph. The other benefit here is something supposed to be now quite common amongst mild hybrid models - the ability to 'torque-fill' under acceleration to compensate for turbo lag. Which is just as well because this S-Cross Hybrid's 'K14D'-series engine was reduced in power a little when the MHEV tech was added to it, plus the car's electrified tech adds 65kgs of extra weight (in the case of the ALLGRIP 4WD version). But at the same time it gained 5Nm of torque (235Nm in total). The 62mph sprint takes 10.2 en route to 118mph. Let's move on to the 1.5-litre Full-Hybrid variant. Here, the engine is combined with a 33bhp belt-driven electric motor generator powered by a tiny 0.84kWh battery. All the power is fed through a 6-speed automated manual gearbox, which you can expect to feel somewhat slow and clunky until you learn to lift off between ratio changes. There's an 'Eco' mode to improve frugality, but you might not want to engage it too often because it restricts throttle response and even in its normal drive setting, this car is no ball of fire.

Visually, the S-Cross has always looked rather dull, so the aesthetic changes made here will be welcomed by dealers, giving this SUV a bolder, more muscular design that enhances its presence with larger and more angular wheel arches and smooth flowing lines. The front design incorporates a raised bonnet line, a piano black front grille and new design 'three LED position' headlamps supposed to help portray a high centre of gravity. This theme continues at the rear with larger combination lamps that integrate horizontally with the rear centre garnish to emphasise a sense of width, in addition to roof rails and integrated rear spoiler. Otherwise, it's as you were. This car remains a mid-sized 'Qashqai'-class SUV that's a little larger than the norm, around 4,300mm in length. Inside, no changes have been made. Up front, it's an inoffensive but not unpleasant piece of design and the fixtures and fittings feel well screwed together from the Hungarian factory, although some of the materials are a bit scratchy. The centre-dash infotainment screen still has graphics that look a bit after-market but it certainly includes quite a lot, with sat nav and 'Apple CarPlay'/'Android Auto' smartphone-mirroring as well as a DAB tuner and Bluetooth. The generous 2,600mm wheelbase length frees up plenty of interior room (the 430-litre boot is one of the biggest in the class) and there's very decent rear seat space too. Though the bench doesn't slide, the backrest reclines though a choice of two angles. The twin sunroofs of the top SZ5 model do rob a few centimetres of headroom though.

Pricing is quite a bit higher than it used to be for the S-Cross. The car is now priced at around £25,000 for the base 1.4 Boosterjet Hybrid 'Motion' manual variant: it's just under £30,000 for the 1.4 Boosterjet Hybrid 'Ultra' ALLGRIP version, again with manual transmission. The Full-Hybid version (offered only with 6-speed automated manual transmission) costs from just under £27,000 - or from around £31,500 in Ultra 4WD form. Standard equipment for the base 'Motion' model is comprehensive and includes seven airbags, 17-inch painted alloy wheels, three-signature LED projector headlamps for low and high beam, Apple CarPlay and Android Auto smartphone connectivity, Traffic Sign Recognition, a Blind Spot Monitor, Adaptive Cruise Control with a speed limiter, keyless entry and start, dual zone auto air conditioning, heated front seats and front and rear parking sensors. Moving up to top 'Ultra' spec adds 17-inch polished alloy wheels, leather seat upholstery, integrated on-board navigation, a panoramic sliding sunroof and further driver safety and convenience with the fitment of a 360 view camera. The S-Cross is available in a total of six different shades, of which one is a solid colour and five are optional metallic finishes.

Suzuki reckons that the 1.4-litre Boosterjet unit's 48-volt mild hybrid tech has delivered improvements in fuel economy and emissions of up to 20%, though it's difficult to verify that claim with any real accuracy. The WLTP figures show a front-driven version of the 1.4-litre model managing 53.2mpg and 120g/km, while the ALLGRIP 4WD 1.4-litre version delivers 47.8mpg and 133g/km. In contrast, the 1.5-litre Full-Hybrid 2WD variant manages 54.3mpg on the combined cycle and 118g/km of CO2; or 48.7mpg and 132g/km in Ultra 4WD form. With both engines, it helps that this remains one of the lightest cars in the crossover class. Even the ALLGRIP variant weighs in at only 1,220kgs. With the 1.4-litre mild hybrid model, this car's insurance group is 25D - or 26D for the SZ5 manual. The mild hybrid S-Cross model's BiK tax band is rated at 30% (or 32% for the ALLGRIP variant). An S-Cross mild hybrid owner would be paying £165 of VED for the first year of ownership (£205 for the ALLGRIP) and £140 of VED from year 2 on. As with all Suzukis, this one is covered by a three year/60,000 mile warranty, plus a year of AA Suzuki Assistance, providing 24 hour UK and European roadside assistance, recovery and associated services. There's also a 12 year perforation warranty.

The S-Cross has long needed a bit of extra pavement presence - and gets it here. Otherwise, this model's attributes remain as before, namely its spacious cabin, potential for light off road exploits and the theoretical frugality of its mild hybrid and full-Hybrid engines. The prominent 'Hybrid' badging here might lead you to expect more efficiency benefits than are actually delivered, the electrification's effect on everyday running costs, though welcome, somewhat marginal. But every little helps and even in the mild hybrid model, the 48-volt tech is certainly useful in the way it better assists with pulling power and allows for fully electrified progress below 10mph. Whether this and the visual update are together enough to make customers interested in the S-Cross who weren't before is more debateable. But it all gives this car extra selling points - and that's never a bad thing.