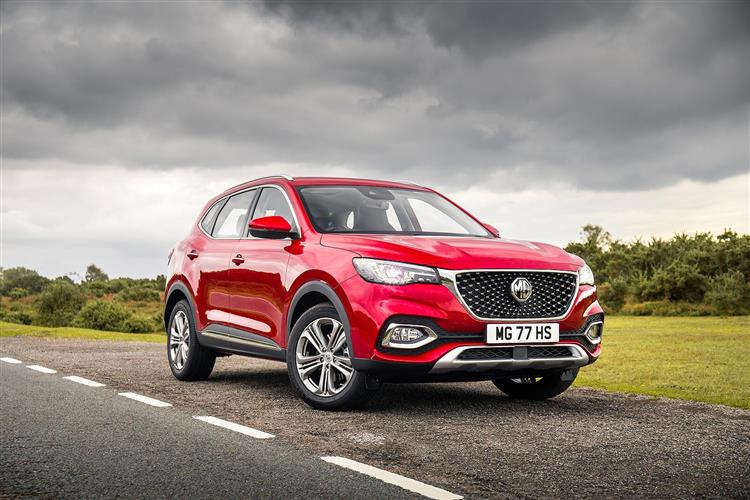 The HS is the largest and most sophisticated MG we've seen. Jonathan Crouch drives it.

MG is one of the market's fastest growing brands, with almost all its sales currently being of its compact ZS SUV. This HS model slots in above that car, enabling the brand to hold on to family buyers who might have out-grown its smaller models. And to target new customers who previously would never have considered MG in this segment. These people are going to want a higher standard of luxury and sophistication than anything the brand has previously offered - and the HS range sets out to provide just that. If MG can successfully deliver with a car like this, all kinds of things might be possible in the future.

The mainstream engine is a 162PS 1.5-litre four-cylinder turbo petrol unit that only drives through the front wheels. It's a reasonably willing thing, capable of 0-62 miles per hour in 9.9 seconds, reaching a top speed of 118mph. Customers have the choice of either a six-speed manual or seven-speed DCT auto gearbox, which on top versions can also be manually controlled using the steering-wheel-mounted paddles. DCT versions also feature a series of drive modes including Eco, Normal, Sport and a driver customisable option. A steering wheel mounted 'Super Sport' button allows the driver to quickly engage Sport mode and it also illuminates the interior's red ambient lighting. You might worry about a petrol engine's relative lack of torque being insufficient for towing duties. This MG's unit develops 250Nm of pulling power, enough to allow it to tug along a braked trailer of up to 1,750kgs in weight - which should be enough for owners to haul medium-sized trailers, caravans, or boats. Because this is a front driven-only model, you shouldn't expect to be able to engage in any serious off road shenanigans - the relatively restricted ground clearance doesn't allow for that anyway. And you shouldn't expect ride and handling to be cutting-edge, though typical family buyers will probably be quite satisfied. The alternative powerplant is a PHEV version of this same engine mated to a 6-speed automatic gearbox. In this plug-in model, this unit works with a 90KW electric motor hitched to a four-speed drive unit and powered by a 16.6kWh battery pack. When the battery pack is fully charged, a WLTP-rated pure electric range of 32 miles is apparently possible, which in urban conditions MG says can be stretched as far as 43 miles.

You expect plenty of metal for your money from an MG and you'll not be disappointed here. Don't be put off by the fact that an HS isn't much cheaper than, say, a Nissan Qashqai; it's quite a lot bigger than one of those - though there are still only five seats. The styling's pretty straightforward, taking the family look lately established with the compact ZS and applying it to a wider, squarer shape. Inside, interior space is class-leading, something you'll especially notice in the rear where there's vastly more space than you'd get in a Qashqai or an Ateca. It's possible to fit three adults here, which is unusual in this class. Headroom's good too - even with the panoramic sunroof fitted. Up front, there's a much higher quality dash than you might be expecting. The seats could be a little more supportive and the indicator stalks feel a bit plasticky, but that's about it on the debit side. There aren't many buttons, most features re-located to a large 10.1-inch centre-dash infotainment touchscreen compatible with both Apple CarPlay and Android Auto. Out back, there's a decently-sized 450-litre boot - that capacity measured up to the windowline. Fold the 60:40-split rear bench and capacity rises to 1,454-litres.

Pricing for this mid-sized family SUV is pitched in the £23,000-£33,500 bracket. That's good value, even if your point of comparison is merely a volume family hatch-based model like a Nissan Qashqai or a SEAT Ateca. But the HS is sized - and priced - to compete more with bigger, more complete mid-sized SUVs; Volkswagen's Tiguan, Mazda's CX-5, Ford's Kuga and Honda's CR-V. Opt for this MG and you're looking at a like-for-like saving of up to £6,000 over something like that. On the mainstream model, just one single 1.5-litre petrol engine is offered but there's a DCT automatic option and two levels of trim - 'Excite' and 'Exclusive'. Even base 'Excite'-spec gives you 18-inch alloy wheels, keyless entry with push button start, a 10.1" colour touchscreen with Apple CarPlay and Android Auto and electric folding and heated door mirrors. Plus a rear parking camera, rain sensing wipers and sat-nav. Top spec 'Exclusive' gives you leather upholstery, front and rear LED sequential indicators, electrically adjustable heated sports front seats, dual zone climate control, ambient lighting and a panoramic opening Skyroof. DCT versions also include driving modes including Super Sport and a customisable electronic opening tailgate. The alternative 1.5-litre PHEV variant is priced from around £31,000 and is again available in 'Excite' and 'Exclusive' levels of trim.

We didn't expect the HS to deliver class-lading efficiency stats and in its conventional form, it doesn't. It gets pretty close to the class standard though. The 1.5-litre petrol manual model manages a combined WLTP combined cycle figure of 37.2mpg and an WLTP-rated CO2 emissions figure of 172g/km. For the DCT auto, the figures are 36.2mpg and 177g/km. All of this means that this car could return up to around 400 miles from every tank - though you'll need to restrain your right foot a bit to get close to that figure. MG reckons the HS PHEV variant will deliver a combined cycle fuel economy reading of 155.8mpg and 43g/km of CO2. We briefed you in our driving section on the all-electric range, WLTP-rated at 32 miles - or 43 miles in urban conditions. That's of course when the battery is fully charged, a process that will take 3 hours when the car is plugged into a 7kW wall box charger, the type of thing that you'll need to get installed in your garage. What about other running cost issues? Well, all versions of this MG come with an impressive seven-year, 80,000-mile warranty as standard - which is better than most rival brands can offer. You might be aware that rival Kia offers a seven-year 100,000 mile package, but MG still reckons its deal is preferable because it's backed by full factory support throughout, whereas direct manufacturer support for rival warranties declines the longer they go on. In many cases they don't go on too long. Many competitors still limit you to a three year back-up package; a few offer five years. MG does better: this is the brand putting its money where its mouth is. The warranty is fully transferrable to future owners. Additionally, there's a six year factory warranty against rust, while a year's breakdown cover is also part of the deal. The MG dealer network is growing all the time - the brand expects to shortly have 120 outlets in the UK. At those outlets, a full digital service record of checks and maintenance provides the customer with complete transparency and full access to the service history of their vehicle.

If you've previously looked at the kind of spacious mid-to-large-sized SUV your family needs, then looked away when you've seen the asking prices, then this MG HS is for you. It's certainly the case that that the cabin finishing isn't quite of the standard you'd find with more established brands. And the same is true of the efficiency figures and the handling. But there's not as much in it as you might think and the potential list price savings here are substantial. If that matters, then we think you'll find plenty to like about this HS. It's practical, well equipped and even quite nice to look at. You'll just have to get used to explaining to your neighbours what it is...