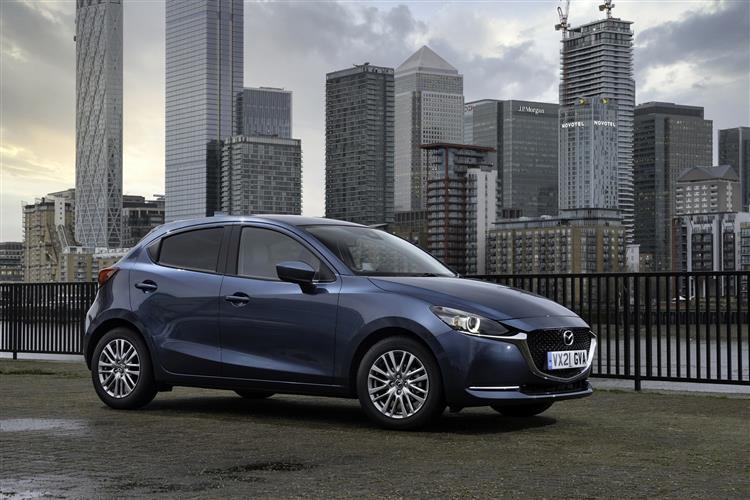 Once, small Mazdas worth buying began and ended with the MX-5 Sports Car. That's no longer the case, as June Neary discovers

There's no doubt that the Mazda brand is going places. The sporty MX-5 roadster has always been a personal favourite, but the Mazda6, the Mazda3 and the second generation Mazda2 we feature here are also well worth consideration. The '2' is Mazda's attempt to inject a bit of pizzazz into its supermini offering, something much needed given the strength of competition in the Fiesta segment. Does it deliver? I wanted to find out.

First impressions are good: it's a car that under fifties would be happy to be seen in. That's thanks to a flowing blend of curves, lots of shape in the flanks and a gaping front grille. The interior's probably the biggest surprise. To be honest, I expected the cabin to be boldly-styled but built out of some shiny plastics and with ergonomics that were a bit hit and miss. It's anything but. In fact, the design is relatively clean and conservative, but the colour combinations that Mazda offers are a knockout and the materials quality is genuinely surprising. It's spacious too. By stretching the wheelbase by 80mm, Mazda has delivered a decently-sized passenger cell for a five-supermini. I had no trouble getting childseats in and out and the boot's deep and boasts 280-litres of room with the seats in place - or 960-litres when they're folded, which is just a few litres off that of the latest Fiesta. There's decent storage space for the paraphernalia of family life in the cabin too, with a big glove box and door pockets that can hold large bottles.

There's no shortage of room behind the wheel, and it's easy to achieve a comfortable driving position. All round visibility is a Mazda2 strong point, the designers concentrating on reducing the amount of blind spots. The turning circle is commendably tight which means that seven point turns in the road become a thing of the past. Having tested this car straight after a Citroen Berlingo, a car with a turning circle visible from space, the Mazda2's manoeuvrability was a welcome plus. Buyers get to choose between either a 1.5-litre petrol engine or a 1.5-litre diesel in a variety of different guises. The petrol motor is offered in 75, 90 or 115PS outputs, while the diesel cranks out a healthy 105PS. It's easily the pick of the bunch. The suspension has been set up to be Volkswagen-firm which you'll feel on poor surfaces but the flipside of this is that the Mazda2 offers reassuring body control in corners. The steering is an electrically-assisted system, so don't expect bucketloads of feedback, but you can count on clean response and perfect accuracy. With a sporty feel and easy manoeuvrability, the Mazda2 is more than just a city scoot. It's got a welcome element of long distance versatility too.

Prices range in the £12,000 to £17,500 bracket common to superminis in this segment. There's a five-level grade structure - SE, SE-L, SE-L Nav, Sport and Sport Nav. Here are three 1.5-litre petrol units with 75, 90 or 115ps on tap, plus a 105ps 1.5-litre diesel. Mazda claims that the range sets new standards for infotainment, in-car connectivity and equipment levels in the segment with the 90ps SE-L Nav models featuring a 7-inch colour touch-screen, a rotary Multimedia Commander infotainment control, MZD Connect, DAB radio, and a satellite navigation system as standard, whilst Sport Nav models also benefit from the addition of 16-inch alloy wheels, smart keyless entry and climate control air-conditioning. In terms of running costs, Mazda's 1.5-litre normally-aspirated SKYACTIV-G petrol engines get between 57.6 and 62.7mpg, which certainly isn't bad, but I'd be willing to wager that in typical real world conditions, they'll fare better than Ford's 1.0-litre Ecoboost unit, the one that's found in a Fiesta. Emissions translate to between 110 and 115g/km. The diesel looks to have made all the right moves. Mazda claims 83.1mpg and 89g/km for the SKYACTIV-D engine, which is bound to be popular with UK buyers. The lightweight SKYACTIV chassis helps keep weight down, with the entry-level petrol models tipping the scales at just 970kg.

The Mazda brand has made huge advances within the past couple of years. I remember visiting the Motor Show at the NEC a while back and walking straight past the Mazda stand, seduced instead by the promise of a decent cup of coffee and a Danish from Ford. Fortunately that wouldn't happen these days. Mazda have turned themselves around and if this MK2 model Mazda2 is anything to go by, they're still gaining momentum. Could I live with a Mazda2? Certainly. Would I buy a Mazda2? A definite maybe.