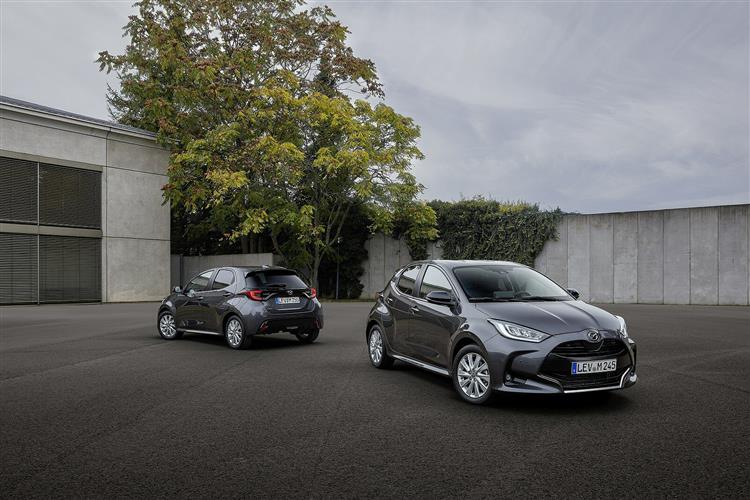 Mazda gets full-Hybrid tech - with a little help from Toyota. Jonathan Crouch takes a look at the Mazda2 Hybrid.

Meet the newest version of the Mazda2. Except that underneath the badges, this isn't a Mazda2 and there's also another Mazda2 on sale, the one we've been familiar with since it was first launched back in 2015. Confusing isn't it? So let's try and straighten things out. That third generation 'DJ/DL'-series Mazda2 still has a bit of life in it, the car revised with new tech mild hybrid powerplants as recently as 2020. But it can't be engineered for the more electrified tech the supermini market now wants, so Mazda has drawn on its frequent partnership with Toyota to broaden the Mazda2 range. Which is why the old mild hybrid Mazda2 e-SKYACTIV-G now sells alongside the car we look at here, the Mazda 2 Hybrid, a rebadged version of the current Toyota Yaris. That makes this car a full-Hybrid, which means that it's engine, unlike the e-SKYACTIV-G mild hybrid unit, can run fully electrically some of the time, which makes all the difference to the efficiency figures. You can't plug it in. But you can expect to get the most economical Mazda2 ever.

This full-Hybrid Mazda2 is a very different product from its mild hybrid showroom stablemate - and you'll feel that immediately it zips more energetically away from rest. That has much to do with the dense cells used in the 0.76kWh lithium-ion battery that powers the two electric motor generators integral to its self-charging full-Hybrid drivetrain. This works with a 1.5-litre three cylinder petrol engine mated to an e-CVT auto gearbox that responds reasonably quickly to throttle inputs. Combined power output is 114bhp, but you'll only really feel that if you switch out of this car's usual 'Eco' drive mode and into the alternative 'Power' setting. There's a further 'EV' mode in which the car can run on battery power only for up to 4 miles or (in theory) at up to 80mph in totally electrified form. Rest to 62mph takes 9.7s. Beyond the city limits, you'll discover reasonably sharp handling, thanks to fairly responsive steering, a low centre of gravity and a stiff modern-era TNGA platform. You can expect refinement to be superb because it is with a Yaris Hybrid, which makes longer trips more palatable, these aided by the standardisation of 'Intelligent Adaptive Cruise Control', which can automatically maintain your distance to the car in front on the highway where there's an all-electric top speed of 80mph. At lower speeds (when the battery will be your primary power source), all you really hear is a bit of muted whining under acceleration from the electrical hardware, exacerbated a little by the enhancement in regenerative braking you get when clicking the e-CVT auto gear selector into its alternative 'B' setting.

This isn't the first time that a Mazda supermini has based itself on a competing product. The final version of this Mazda2 model line's predecessor, the last 121 model launched in 1996, was a rebadged Ford Fiesta, though a bit more effort was made back then to differentiate the product. This time round, all this been changed are the badges on the grille, the tailgate and steering wheel. That's possibly because this Mazda2 Hybrid is actually built by Toyota on a production line alongside the Yaris. Inside, as with that Toyota, you'll notice features more commonly seen in larger cars, including a large 10-inch centre-dash infotainment touchscreen. 'Apple CarPlay'/'Android Auto' smartphone-mirroring is standard. There's also a further TFT information display between the two instrument binnacle gauges. The driver's seat positions you quite low and there are plenty of soft-touch materials around the cabin. The dashboard is slim and is set quite low, with a wide and high centre console. The driver's instrument binnacle has twin digital meters flanking the TFT multi-information display, and is presented with a shallow hood. The rear part of the cabin isn't especially spacious, but the 286-litre boot area is of a versatile shape.

As expected, pricing broadly replicates that of the Yaris, which means a span in the £20,000 to £23,000 bracket. From launch, Mazda was asking from £20,300, with three trim levels, 'Pure', 'Agile' and 'Select'. Most customers will opyt for mid-range 'Agile' trim, which includes 15-inch alloy wheels, a reversing camera, an 8-inch colour touch-screen centre display and smart keyless entry. There's also the option to add the £980 Comfort Pack which brings styling additions like gloss black bumper mouldings and a gloss black front grille with lower satin chrome surround. It also sees the addition of LED headlights and front fog lights, plus inside, the Comfort Pack adds sports style front seats with black fabric with synthetic leather trim, plus dual-zone climate control. Safety is a priority with this supermini: Mazda here has benefited from the fact that Toyota created the fourth generation Yaris to be the world's safest compact car, this design featuring significant advances in both active and passive safety systems. Standard advanced driver assistance systems include full speed-range intelligent adaptive cruise control and lane trace assist. In addition to these systems, the bodyshell has been developed to provide the best possible occupant protection, in line with stricter testing standards. For example, to provide protection in the event of a side impact, this Mazda2 Hybrid is, alongside the Yaris, the only car in its segment to be fitted with a centre airbag.

The efficiency figures here are, as you'd expect, pretty much identical to those of the competing Yaris, so expect a WLTP-certified combined fuel economy reading between 70.6mpg and 74.3mpg, with CO2 emissions of up to 87g/km, depending on spec. To give you a point of comparison, the e-SKYACTIV-G mild hybrid Mazda2 90PS model manages up to 52.3mpg in automatic form. Quite a difference. Those in a frugal frame of mind will want to try and get as close as possible to replicating the official figures by using the instrument binnacle's left hand 'Power meter' display and as often as possible staying in its blue 'Charge' and green 'ECO' zones. There's an available 'EV' button that's supposed to fix the car in electrified motion (which can apparently take place at up to 80mph). In reality though, you'll find that the batteries are hardly ever charged up enough for you to be able to use this feature. And even when you can, it'll only last for around 4 miles. The Mazda2's residual values have always held up better than a Fiesta and a lot better than a Corsa and will stack up even more competitively now that the efficiency of this model has been improved.

Badge engineering can get confusing. Toyota has previously marketed the current third generation 'DJ/DL'-series Mazda2 as a 'Yaris' in North America. Now we're seeing the Yaris sold as the 'Mazda2' in Europe, a stop gap product until Mazda's full range of plug-in hybrid and EV products arrive. If you're going to have a stop gap product, the current fourth generation Yaris is a good one to base it on. It gives you everything you need in this day and age in a small hatch - and nothing you don't. Yes, there's a premium to pay over the older mild hybrid Mazda2, but the additional efficiency of this car's full-Hybrid powertrain should cover most of that extra cost over an ownership lifetime, at the end which you will have enjoyed a more modern product. Not a real Mazda perhaps. But a very complete supermini nonetheless.