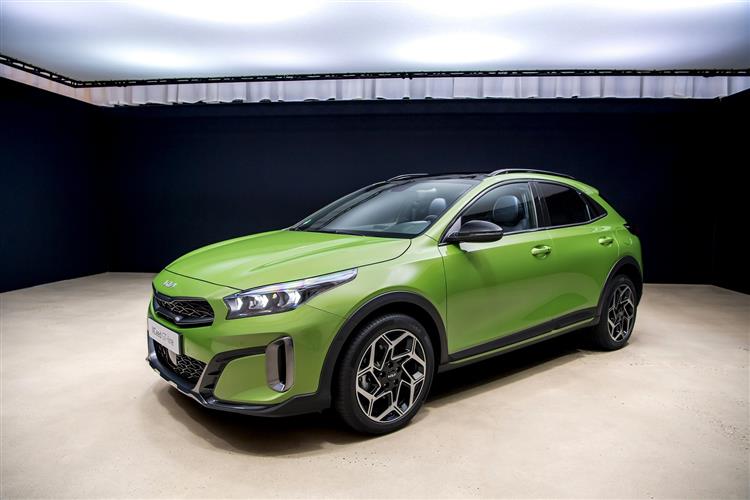 It's easy to see why Kia is offering this XCeed compact SUV; sales of Crossover models like this are going through the roof just at present. It's less easy to see where it fits within the Korean maker's model line-up. After all, at much the same price point as more affordable XCeed variants, Kia has its Stonic small Crossover. And plusher XCeed derivatives overlap with the brand's Niro SUV hybrids and some versions of the company's mid-sized Sportage SUV. Then of course there are also versions of the Ceed hatch, the Ceed Sportswagon estate and the ProCeed sports estate. Complicated isn't it... What is clear is that the Xceed, launched in 2019, has been a strong seller for the Korean brand, accounting for over 10% of its overall sales. Hence the importance of the mid-term facelift which has created the car we're going to look at here.

For the UK market, Kia has slimmed down the engine range to just two units, dispensing with the previous 1.0-litre T-GDi petrol unit and the 1.6-litre CRDi diesel. Instead, the volume model gets a conventional 1.5-litre T-GDI petrol powerplant with 160PS. The alternative, as before, is a 1.6-litre PHEV powertrain with 141PS, which combines a four cylinder GDI petrol engine with an 8.9kWh battery pack, a 44.5kW electric motor and 6-speed dual clutch auto transmission. The PHEV derivative has a 29 mile EV range - much the same as before. Across the XCeed line-up, not much has changed with regard to ride and handling, though Kia says it's improved the ride over poorer surfaces by adding front hydraulic rebound stoppers. These rubber bump-stops float in hydraulic fluid, absorbing even large suspension shocks with a smooth and progressive response, preventing the body from bouncing as the suspension settles itself after rapid compression. A change to spring rates helps in this area too - they're now 7% softer at the front and 4% softer at the rear than a normal Ceed. Steering feel has received some attention too: the electronic control unit governing the power steering motor has been tuned to deliver a quicker initial response to driver inputs, though Kia has also made response slightly lighter to reduce driver fatigue on longer journeys and at low speeds. As before, there's a 'Drive Mode Select' system with 'Eco', 'Normal' and 'Sport' settings so that drivers can fine-tune steering weight, throttle response and (on auto variants) gear shift speeds. And as usual, all XCeeds get lane keep assist and forward collision warning fitted as standard.

If you happen to be familiar with the Xceed, you'll immediately notice the changes that Kia has made to this updated version. The front grille has been restyled, as have the LED headlamps that flank it, plus there's a revised front bumper and air intake design. The dedicated 16 or 18-inch alloys are segment-specific and draw attention to the ground clearance - which is 182mm on the 18-inchers. Otherwise things are much as before. Wheel arch and side sill cladding, along with satin chrome roof rails, lend the car a tough presence. While the wheelbase remains the same as other models in the Ceed line-up at 2,650mm, the XCeed's front and rear overhangs have been extended over the five-door hatchback by 25mm at the front (to 905mm) and 60mm at the rear (to 840mm). The only body panels carried over from its five-door hatchback sibling are the front doors. Inside, the main change applies only to top 'GT-Line'-spec; the addition of a 12.3-inch 'Supervision' digital instrument cluster to replace the analogue dials fitted elsewhere in the range. Across the line-up, Kia says there's a 'sportier' driving position too. As before, there's a 'floating' touchscreen infotainment monitor in the centre of the dash, which is either 8-inch or 10.25-inches (depending on spec), with the bigger screen linking into 'Kia Connect', a system that links drivers to the world around them by providing invaluable information via the in-car touchscreen or through the Kia Connect app. Featuring Kia Live services accessed through the vehicle's infotainment system, Kia Connect uses its own eSIM card to retrieve and update live data during a drive. As before, the sculptured centre console is angled slightly towards the driver and both the ergonomics and the driving position here are difficult to fault. Rear seat space is similar to that of the Ceed hatch, but at 426 litres, the boot is 31-litres larger than it is in that more ordinary variant.

XCeed pricing kicks off from just under £23,000 and rises up to just under £30,000 in conventional form, offered with a choice of '2', '3' and 'GT-Line' trim levels, all featuring manual transmission and Kia's 1.5-litre T-GDI petrol engine. The PHEV plug-in model prices from around £32,500 and only comes with '3'-spec. All versions are well equipped, with even base '2'-spec versions getting 16-inch alloy wheels, LED bi-function headlights and a 7-speaker sound system. There's also cruise control with a speed limiter, a reversing camera and a 'Forward-Collision Avoidance Assist' system with city, pedestrian and cyclist protection. Move up to '3'-spec and you get 18-inch wheels and the base 8-inch infotainment screen is replaced by a more sophisticated 10.25-inch central monitor, plus there's privacy glass, heated front seats and dual-zone air conditioning. From this level upwards, you also get the 'Kia Connect' range of online services so that you can interact with your XCeed via a provided smartphone app. 'GT-Line'-spec gives you a body kit, specific 18-inch wheels, a panoramic glass roof and a powered tailgate. Inside, there's an 8-speaker JBL premium audio system, a 12.3-inch Supervision instrument cluster, heated rear seats and upholstery in a combination of black leather and suede. There's also a Blind-spot Collision Warning set-up and a Smart Park Assist System, which can automatically steer you into tight spaces.

Let's get to the WLTP figures. For the 1.5 T-GDi petrol, expect just over 40mpg on the combined cycle and around 150g/km of CO2. Many XCeed buyers though, will want the 1.6-litre petrol-powered plug-in hybrid version of this car. This delivers 201.8mpg on the combined cycle and 32g/km of CO2. In its EV mode, the Kia XCeed Plug-in Hybrid is capable of travelling up to 36 miles and takes 2 hours and 15 minutes to recharge its battery pack to 100 per cent using a 3.3kW AC charger. A strong buying incentive is much-trumpeted 7 year / 100,000 warranty which, like the 'Care-3' servicing packages, is transferrable to future owners. However, it is worth pointing out that the warranty only offers unlimited mileage for the first three years you own the car; thereafter, you'll have a 100,000 mileage restriction. If in future, the car is sold through a Kia Used Approved Dealership when less than 18 months old or with less than 18,000 miles on the clock, the warranty will be topped up to match that of a new model. You might also want to note that roadside assistance cover is limited to one year, but you do get a long 12 year bodywork warranty.

Life is certainly a great deal more interesting for someone wanting to buy a family hatchback-sized car these days. Say what you like about the current SUV craze but it's certainly delivered up much more of a 'want one' factor when it comes to the purchase of a 'C-segment' model like this. And the XCeed delivers this with the kind of smart styling you'd normally expect to have to stretch to a premium brand to get. Especially in this updated form. Likely XCeed buyers will like the looks; they'll appreciate how it's so easy to switch into this car from something more ordinary; and they'll value the long 7 year warranty. In short, if you're shopping for this kind of car, there are plenty of reasons why you might want this one.