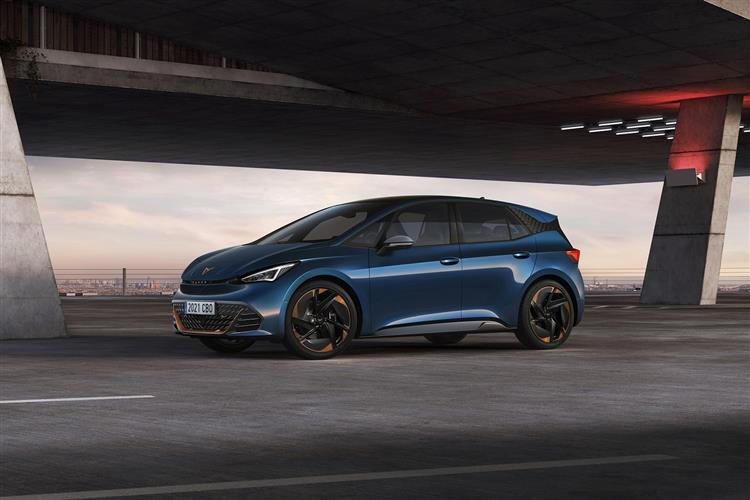 It was only a matter of time before we started seeing performance-orientated versions of compact family EVs, but what if you could have one that was, in all its forms, fundamentally developed for enjoyment at the wheel? Yet still as practical, ecological and frugal as its battery-powered rivals. That's the promise of this car, the CUPRA Born. You may by now be vaguely aware of the CUPRA brand. Once it was purely a performance badge on fast SEATs, but now it's a marque in its own right offering two repackaged SEAT models (the CUPRA Ateca and the CUPRA Leon) and one design of its own (the CUPRA Formentor SUV). CUPRA was clear from the start that electrification would play a major part in its product development and, sure enough, the Leon and the Formentor can both be had in Plug-in 'e-Hybrid' forms. The Born though, is a full EV, using the same engineering you'll find in a Volkswagen ID.3 or a Skoda Enyaq iV, but packaged with a performance twist. You'd think this CUPRA EV model would have had a wider audience with the SEAT branding it was originally supposed to have (initially it was slated to be sold as a SEAT el-Born). But the VW Group has decided instead that this car should be a touch more aspirational than that. Let's check it out.

The Born springs away from rest of course, as all EVs do, running out of puff just after the point where you realise that the torque rush has inadvertently pushed you over the speed limit. Everything so far is just as it would be in the Volkswagen ID.3 this Born is almost entirely based on. But CUPRA wants to convince you that this is a far sportier confection. And to that end, has fitted shorter coil springs lowering the ride height, along with wider tyres, a more direct variable-ratio steering set-up and a retuned stability control system. To fit with all this, the electric power output of the kind of Born model most people will choose - 204PS - is the kind of output only offered at the heady heights of the ID.3 line-up, though the 58kWh battery it's linked to is the one that most versions of that VW use, here delivering a range of up to 265 miles. That figure falls fractionally to 262 miles if you add in the optional e-Boost motor you can't have on an ID.3, which adds an extra 26PS of power for 30 seconds when you stamp on the throttle and ought to have been standardised on the Born to give it a more significant unique selling point. The 230PS e-Boost motor comes as standard if you pay the extra for the larger 77kWh battery, which increases driving range to 343 miles. There are four main drive modes - 'Comfort', 'Performance', 'Range' and 'Individual', with a further 'CUPRA' setting for the e-Boost models. Optional 'DCC' adaptive damping enhances the 'Comfort' setting, but you don't really need it because the standard passive set-up is very good indeed. The Barcelona engineers must have worked really hard on that: a pity then, that they weren't given leave by Wolfsburg to fiddle with the steering, which despite its quicker rack feels remote and very light on feedback. Even as it is though, this is (as intended) a far more engaging thing than its ID.3 cousin; to the point where we'd find it hard to think of another similarly-sized EV in this price bracket that we'd recommend over this one to a keen driver.

CUPRA says this Born was 'designed and developed in Barcelona' - which is poppycock of course: it's a restyled Volkswagen ID.3. And rolls down the same German Zwickau production line as its sister car, unlike CUPRA's other Iberian-built models. You can't deny though, that it's got a bit more flair, attitude and presence than its Wolfsburg cousin. It's been described as the 'scary big sister' to the ID.3. Maybe so. It's certainly a little bigger, something you may pick up from a profile perspective, the Born measuring in 61mm longer, though that still leaves it some way short of the upper mid-sized EV hatches and crossovers CUPRA also wants to target - Volkswagen ID.4 for instance, is 262mm lengthier. At the wheel, you get quite a different ambiance from the other compact VW Group EVs available at this price point - and quite an agreeable one. What is familiar is the futuristic feel: as with an ID.3 or a Skoda Enyaq, there's no need for a gear lever, an ignition slot or a handbrake. And, also as with those cars, there's a 12-inch centre monitor and a 5.3-inch 'Digital Cockpit' instrument screen attached to which is a gear selector, the whole binnacle moving up and down as you adjust the wheel. Otherwise, this Born sets itself apart with a darker vibe, a strange indented passenger-side dash finish, sustainably-sourced soft-touch surfaces and the usual CUPRA brand copper-coloured highlights, which here appear on the steering wheel, the vents, the seat stitching and frame the open part of the lower centre console. There's a surprising amount of room for two adults at the rear. And out back, there's a reasonable 385-litre boot, the same as an ID.3. Push everything forward and that extends to 1,267-litres.

For a CUPRA Born, at the time of this test in Autumn 2022, the brand was asking in the £35,000 to £40,000 bracket. The availability of a smaller-battery 45kWh 150PS derivative would obviously make that entry-point price a little more affordable. There are three trim levels - 'V1', 'V2' or, as in this case, 'V3'. An CUPRA offers a useful free 'EV&Me' app so that you can check out whether switching to an electric vehicle is right for you. From launch, the main powertrain option was the one we're trying here - a 58kWh battery mated to a 204PS electric motor. Avoid entry-level trim and you'll have the chance to pay for a couple of powertrain upgrades. Around £800 more gets you the 58kWh battery powering a perkier 230PS e-Boost electric motor; or around £3,600 more gets you the longer range of the larger 77kWh battery, which comes linked to that 230PS e-Boost motor. So if considering all of that has convinced you towards Born ownership, the decider might be a generous level of spec. Well, as you'd hope for this kind of spend, all variants come well equipped. There's LED headlights and tail lamps, auto headlamps and wipers, adaptive cruise control, Sport suspension, all-round parking sensors, keyless entry and a 'Drive Profile Selection' driving modes system with 'Range', 'Comfort', 'Performance' and 'Individual' settings - plus with the e-Boost electric motor, you get an extra 'CUPRA' mode. Inside every Born, expect to find a 5.3-inch 'Digital Cockpit' instrument binnacle screen, ambient lighting, a rear view camera, an auto-dimming rear view mirror and front sport bucket seats. Media's taken care of by a 12-inch centre Navigation display with an online voice assistant and all the usual smartphone-mirroring and EV features. Plus there's a 'CUPRA Connect' app so you can remotely interact with your Born, even when you're not with it.

Most customers will probably choose the 58kWh 204PS package we're trying here, which offers up to 265.3 miles of driving range. Add in the 230PS e-Boost motor and that drops fractionally to a best of 262.2 miles. Stretch to a top derivative with the 77kWh battery and the range figure rises to 343 miles. At the time of filming, CUPRA hadn't confirmed whether it was going to import the base 45kWh 150PS model, but for reference, that variant offers up to 211 miles of driving range. As for charging, well for the 58kWh battery, charging from 0-100% takes 6 hours 15 minutes using an 11kW AC wall charger, but it can also be recharged from 5-80% using a 120kW DC rapid charger in just 35 minutes. The larger 77kWh battery can gain 62 miles of range in just 7 minutes if you happen to be using a 125kW charger, which can manage a 5 to 80% charge in 35 minutes. Customers will be offered a CUPRA-branded domestic wall box for home charging, which can be controlled using the company's 'Easy Charging' smart phone app. It's not only that your energy costs will be lower: you should also make savings in insurance, road tax and the fact that no oil changes are required. The Spanish maker says that its aim is to make sure that the battery pack lasts as long as the car and, sure enough, that battery pack is warrantied to have at least 70% of its usable capacity after eight years or 100,000 miles.

The decision to replace SEAT badges with CUPRA ones on this Born EV was interesting and says much about the VW Group's commitment to its sporting brand. Plus it also fits with this design's mildly dynamic vibe. Yes, in some ways it's a Volkswagen ID.3 in a track suit, but at the same time, it also offers something just a little different - and arguably more appealing. It's not as different from an ID.3 as CUPRA thinks it is; the Born's cause would have been helped in this regard if the brand has standardised the faster e-Boost motor and made that a unique selling point. But this car is more engaging to drive - and to our eyes more engaging to look at too. Do you really want to pay considerably more in this segment to get only slightly more space and fractionally more driving range? From an EV that almost certainly won't be as interesting at the wheel or look as good on your driveway? Such is the Born ultimatum. And we can understand if you found yourself tempted by it.